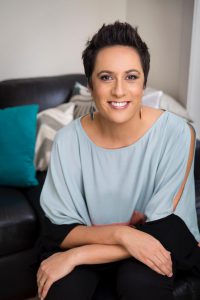 Justine Teggelove is one of the founders and CEO of Rodine Australia. Rodine is a commercial construction company based in Melbourne with a national project portfolio for a multitude list of high profile clients. Melbourne International Airport, Westfield (Scentre Group), GPT and MCG to name a few.

As its CEO, and before that its Operations Manager and Business Manager, she has been instrumental in transforming Rodine into a dynamic, innovative and fully-integrated construction company. She is also one of only a few women in an executive position in the commercial construction industry in Australia.

Not to sit on her laurels, and noticing a gap in the market for female consumers in the building and property arena, Justine Co-founded Build In Common in 2017, anAustralian first. Build In Common addresses empowering females to be wellinformed and confident consumers in the building and property market. Justine and her co-founder, Pia Turcinov, knew a well informed and active consumer in a project would be a win win for the industry, economy and client. This has proven to be true as since launching in late 2017, Build In Common quickly gained a national presence with a multitude of media coverage and industry interest.

Justine had the honour in 2018 of being listed in the Australian construction industry #Top 100 Women initiative. She has also been nominated for Telstra Australian Business Woman of the Year Awards in 2016 and 2017. Additionally to this, Justine was invited to attend a Business Chicks and Virgin Unite women’s leadership program on Necker Island in 2016 with Sir Richard Branson, Netflix Co-founder Mr Marc Randolph and other world leaders.

Justine has a diverse experience portfolio, including some years in health management and raising a family previous to co-founding her companies. Outside of day-to-day management, Justine is integral to overseeing Rodine and Build In Commons strategic missions, as well as its wider community responsibilities. For example, Justine manages Rodine’s philanthropic activities that align with the company’s core value of ‘Building Communities’ and is an active Mentor to individuals in a multitude of industries underpinned with a strong ethos of female empowerment and support.